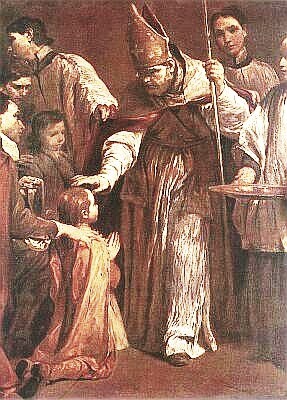 "When the apostles in Jerusalem heard that Samaria had accepted the word of God, they sent Peter and John to them.

When they arrived, they prayed for them that they might receive the Holy Spirit, because the Holy Spirit had not yet come upon any of them; they had simply been baptized into the name of the Lord Jesus.

Then Peter and John placed their hands on them, and
they received the Holy Spirit."
Acts of the Apostles 8:14-17

Confirmation is the completion of Baptism. It is a sign appointed by God which conveys the gift of His Holy Spirit. People sometimes put the emphasis wrongly on the candidate confirming his or her Baptismal promises. This central moment of the sacrament, however is not this preliminary element but God confirming us by His sealing us with the gift of the Holy Spirit, signified by the Oil of Chrism administered by the Bishop.

In Confirmation we are given a special strengthening by the Holy Spirit to spread and defend the Faith by word and action as true witnesses of Christ, to confess the name of Christ boldly and never to be ashamed of the Cross. As the Holy Spirit came upon the Church at Pentecost, empowering the Apostles to spread the Good News of Jesus Christ throughout the world, so the Holy Spirit gives power to those who are confirmed to share in God's work, His mission in the entire world. The Sacrament of Confirmation commisions us to bear public witness to Christ.

After readings from Scripture and a homily in the Confirmation Mass, the candidates renew their Baptismal promises. Then the bishop extends his hands over the whole group of candidates and calls God to send His Holy Spirit upon them. This Spirit is spoken of by the prophet Isaiah: "the spirit of wisdom and understanding, the spirit of right judgement and courage, the spirit of knowledge and reverence, the spirit of wonder and awe in God's presence" (Is 11:2).

Each candidate, accompanied by a sponsor, then comes to the Bishop, who traces a cross with the Oil of Chrism on the candidate's forehead saying "Be sealed with the gift of the Holy Spirit". The Bishop greets the newly confirmed person with a sign of peace. The 'Chrism' used in Confirmation (also in Baptism and Ordination) is olive oil mixed with a perfume. This has been consecrated by the Bishop at the 'Chrism Mass' in Holy Week. Its use signifies the gift of the Holy Spirit.

Preparation for Confirmation can take many different forms but whatever the programme, it should aim at leading the candidate to a more intimate union with Christ and a more lively familiarity with the work of the Holy Spirit. The candidate needs to develop a sense of belonging to the universal Church as well as the parish community. Shortly before Confirmation the candidate should make use of the sacrament of Reconciliation so as to be ready to receive the Holy Spirit.

Candidates will need the spiritual help of a sponsor who may well be one of the baptismal godparents.

A sacrament in which the Holy Ghost is given to those already baptized in order to make them strong and perfect Christians and soldiers of Jesus Christ.

It has been variously designated: bebaiosis or confirmatio, a making fast or sure; teleiosis or consummatio, a perfecting or completing, as expressing its relation to baptism. With reference to its effect it is the “Sacrament of the Holy Ghost”, the “Sacrament of the Seal” (signaculum, sigillum, sphragis). From the external rite it is known as the “imposition of hands” (epithesis cheiron), or as “anointing with chrism” (unctio, chrismatio, chrisma, myron). The names at present in use are, for the Western Church, confirmatio, and for the Greek, to myron.

I. PRESENT PRACTICE AND DOCTRINE

In the Western Church the sacrament is usually administered by the bishop. At the beginning of the ceremony there is a general imposition of hands, the bishop meantime praying that the Holy Ghost may come down upon those who have already been regenerated: “send forth upon them thy sevenfold Spirit the Holy Paraclete.” He then anoints the forehead of each with chrism saying: “I sign thee with the sign of the cross and confirm thee with the chrism of salvation, in the name of the Father and of the Son and of the Holy Ghost.” Finally, he gives each a slight blow on the cheek saying: “peace be with thee”. A prayer is added that the Holy Spirit may dwell in the hearts of those who have been confirmed, and the rite closes with the bishop’s blessing.

The Eastern Church omits the imposition of hands and the prayer at the beginning, and accompanies the anointing with the words: “the sign [or seal] of the gift of the Holy Ghost.” These several actions symbolize the nature and purpose of the sacrament: the anointing signifies the strength given for the spiritual conflict; the balsam contained in the chrism, the fragrance of virtue and the good odor of Christ; the sign of the cross on the forehead, the courage to confess Christ, before all men; the imposition of hands and the blow on the cheek, enrollment in the service of Christ which brings true peace to the soul. (Cf. St. Thomas, III:72:4).

The bishop alone is the ordinary minister of confirmation. This is expressly declared by the Council of Trent (Sess. VII, De Conf., C. iii). A bishop confirms validly even those who are not his own subjects; but to confirm licitly in another diocese he must secure the permission of the bishop of that diocese. Simple priests may be the extraordinary ministers of the sacrament under certain conditions. In such cases, however, the priest cannot wear pontifical vestments, and he is obliged to use chrism blessed by a Catholic bishop. In the Greek Church, confirmation is given by simple priests without special delegation, and their ministration is accepted by the Western Church as valid. They must, however, use chrism blessed by a patriarch.

There has been much discussion among theologians as to what constitutes the essential matter of this sacrament. Some, e.g. Aureolus and Petavius, held that it consists in the imposition of hands. Others, with St. Thomas, Bellarmine, and Maldonatus, maintain that it is the anointing with chrism. According to a third opinion (Morinus, Tapper) either anointing or imposition of hands suffices. Finally, the most generally accepted view is that the anointing and the imposition of hands conjointly are the matter. The “imposition”, however, is not that with which the rite begins but the laying on of hands which takes place in the act of anointing. As Peter the Lombard declares: Pontifex per impositionem manus confirmandos ungit in fronte (IV Sent., dist. xxxiii, n. 1; cf. De Augustinis, “De re sacramentaria”, 2d ed., Rome, 1889, I). The chrism employed must be a mixture of olive oil and balsam consecrated by a bishop. (For the manner of this consecration and for other details, historical and liturgical, see CHRISM.) The difference regarding the form of the sacrament, i.e. the words essential for confirmation, has been indicated above in the description of the rite. The validity of both the Latin and the Greek form is unquestionable. Additional details are given below in the historical outline.

Confirmation can be conferred only on those who have already been baptized and have not yet been confirmed. As St. Thomas says:

They should also be in the state of grace; for the Holy Ghost is not given for the purpose of taking away sin but of conferring additional grace. This condition, however, refers only to lawful reception; the sacrament is validly received even by those in mortal sin. In the early ages of the Church, confirmation was part of the rite of initiation, and consequently was administered immediately after baptism. When, however, baptism came to be conferred by simple priests, the two ceremonies were separated in the Western Church. Further, when infant baptism became customary, confirmation was not administered until the child had attained the use of reason. This is the present practice, though there is considerable latitude as to the precise age. The Catechism of the Council of Trent says that the sacrament can be administered to all persons after baptism, but that this is not expedient before the use of reason; and adds that it is most fitting that the sacrament be deferred until the child is seven years old, “for Confirmation has not been instituted as necessary for salvation, but that by virtue thereof we might be found well armed and prepared when called upon to fight for the faith of Christ, and for this kind of conflict no one will consider children, who are still without the use of reason, to be qualified.” (Pt. II, ch. iii, 18.)

Such, in fact, is the general usage in the Western Church. Under certain circumstances, however, as, for instance, danger of death, or when the opportunity of receiving the sacrament is but rarely offered, even younger children may be confirmed. In the Greek Church and in Spain, infants are now, as in earlier times, confirmed immediately after baptism. Leo XIII, writing 22 June, 1897, to the Bishop of Marseilles, commends most heartily the practice of confirming children before their first communion as being more in accord with the ancient usage of the Church.

* an increase of sanctifying grace which makes the recipient a “perfect Christian”;

* a special sacramental grace consisting in the seven gifts of the Holy Ghost and notably in the strength and courage to confess boldly the name of Christ;

* an indelible character by reason of which the sacrament cannot be received again by the same person.

Regarding the obligation of receiving the sacrament, it is admitted that confirmation is not necessary as an indispensable means of salvation (necessitate medii).

On the other hand, its reception is obligatory (necessitate præcepti) “for all those who are able to understand and fulfill the Commandments of God and of the Church. This is especially true of those who suffer persecution on account of their religion or are exposed to grievous temptations against faith or are in danger of death. The more serious the danger so much greater is the need of protecting oneself”. (Conc. Plen. Balt. II, n. 250.) As to the gravity of the obligation, opinions differ, some theologians holding that an unconfirmed person would commit mortal sin if he refused the sacrament, others that the sin would be at most venial unless the refusal implied contempt for the sacrament. Apart, however, from such controversies the importance of confirmation as a means of grace is so obvious that no earnest Christian will neglect it, and in particular that Christian parents will not fail to see that their children are confirmed.