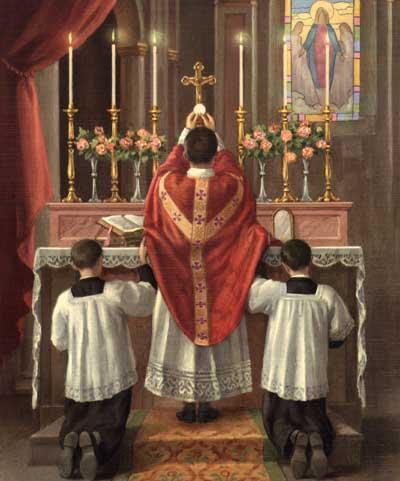 John 6:32, 51-52: "Then Jesus said to them: Amen, amen I say to you; Moses gave you not bread from heaven, but my Father giveth you the true bread from heaven... I am the living bread which came down from heaven. If any man eat of this bread, he shall live for ever; and the bread that I will give, is My Flesh, for the life of the world."

The Eucharist must be received at least once a year, during the Easter Season, by those who've reached the age of reason, though frequent -- even daily -- Communion is encouraged. Traditionally, the Eucharist shouldn't be received more than once a day unless it is given as Viaticum during Extreme Unction (the 1983 Code of Canon Law strangely allows for a second reception of the Eucharist "only within a eucharistic celebration in which that person participates.")

The matter of the Sacrament itself are wheat bread made only of flour and water, with nothing added (no honey, no spices, etc; nothing may be added. The use of leavening in the Latin Church is illicit) and wine fermented from grape juice. The former is confected by God through a true priest using the words:

This is My Body

The latter is confected by the words "this is the Chalice of My Blood," which are spoken in the below context in the traditional Mass:

For this is the Chalice of My Blood, of the new and eternal Testament: the Mystery of Faith: which shall be shed for you and for many unto the remission of sins

After the substance of bread and wine are changed into His Body and Blood, the accidents -- the appearance, taste, texture of bread and wine -- remain, but what looks like "bread" and "wine" are, in substance, the Body, Blood, Soul, and Divinity of Christ. In other words, outside of Eucharistic miracles which have taken place over 2,000 years, what the eyes and mouth see and taste are the accidents of "bread" and "wine," but what is truly received is Christ and remains Christ until and unless the accidents change such that they are no longer compatible with the species of "bread" and "wine." By this we know, for example, that once the Host goes into one's stomach and is digested, or if a liquid were added to the Precious Blood such that the accidents are no longer recognizable as the accidents of "wine," the Sacrament is no longer there.

Because of the above, it is not okay to refer to the Blessed Sacrament as "bread" or to the Precious Blood as "wine." Once the bread and wine have been consecrated, they are no longer "bread" and "wine"; they are Christ -- Body, Blood, Soul, and Divinity, and the proper words to use to speak of them are "Blessed Sacrament," "Eucharist," "Precious Blood," "Sacred Host" ("Host" comes from the Latin word "hostia" meaning "victim"), etc. The consecrated Hosts and Precious Blood are and will remain Christ regardless of the faith of the people in the pews. They are and will remain Christ whether on the Altar or in the tabernacle or in your mouth or, God forbid, on the floor. They are and will remain Christ for ten years or a thousand years, as long as the accidents of bread and wine remain.

The Precious Blood is always consumed totally by the priest at the Mass, and the priest will always consume one Sacred Host, distributing others to the people, if present. Remaining Hosts are kept in a ciborium inside the tabernacle between Masses, and this Divine Presence is signalled to us by the sanctuary lamps that burn always outside the tabernacles of our churches and invite us to adore Him and be in His Presence to pray.

The effects of receiving the Sacrament are:

The proper way to receive the Blessed Eucharist at the altar rail at Mass is to kneel and fold one's hands in the "prayer" gesture (or place them under the houseling cloth at the altar rail, if such a cloth is used; don't touch the cloth or the rail in either case). An acolyte or altar boy will hold a paten underneath your chin so that no precious particles will fall to the floor. The priest will bless you by making a Sign of the Cross with the Sacrament (a small one in the air) and then place the Sacrament on your tongue, all while saying these words:

Open your mouth wide enough and stick out your tongue far enough to easily receive the Sacrament (once received, don't respond "Amen" as is done in the Novus Ordo Rite). Many priests recommend closing your eyes when receiving so that you're not tempted to follow his hand; it's best to not move at all. And, of course, don't close your mouth until the Host is safely on your tongue and the priest's hand is out of the way! Make the Sign of the Cross after receiving Communion, then return to your pew and kneel in thanksgiving (many people cover their faces with their hands or veils at this time to increase a sense of intimacy).

Please note that the Eucharist is not chewed, but is allowed to soften in the mouth and then swallowed.  This is to avoid having the smallest particle stuck in one's teeth where it might be desecrated later by coming into contact with the profane. Having the very Body, Blood, Soul, and Divinity of Christ mingle with a gulp of Mountain Dew is hardly the treatment He deserves -- but pondering the very possibility of such a thing is to induce gratitude for the amazing humility with which He comes to us under the appearance of bread; why, if He were to come to us in a way that revealed His glory to our senses, we would no doubt die from being in the Presence of such obvious Holiness.

The Eucharist should never be touched but by consecrated hands (i.e., the hands of a priest, who is the ordinary minister of the Sacrament, or of a delegated deacon, who is the extraordinary minister of the Sacrament) unless emergency or true charity dictate otherwise, and women should traditionally have their heads covered whenever they are in His Presence - whether during simple visits to a church where the tabernacle is, during sick calls or Unction, and when receiving the Eucharist at Mass.

A beautiful, traditional, prayer to pray after receiving Communion is the "Anima Christi" (Soul of Christ) -- a favorite prayer of St. Ignatius of Loyola. The origins of this ancient prayer are unknown, but it dates to at least A.D. 1334.


When offering the Eucharist outside of the Mass (such as during sick calls or Unction), the priest should wear a surplice and stole. If the communicant (the one receiving Communion) is able to kneel, he should; if he is bedridden, a white linen cloth should be laid over his breast to ensure no particles fall and are desecrated. If one is unable to receive the Host, the priest may arrange for some of the Precious Blood to be given instead. Under either species -- i.e., either the Host or the Precious Blood -- the Sacrament is "the entire Christ" -- Body, Blood, Soul, and Divinity, so one should never feel as though one is being "deprived" by receiving Christ in one form rather than the other.

Also note the language used in reference to Holy Communion: while many Protestants speak of "taking Communion," Catholics use the phrase "receiving Communion" -- a more passive terminology that emphasizes humility, that reminds us that it is by grace that we are saved, and that emphasizes the role of the ordained priesthood.

Since Christ is present under the appearances of bread and wine in a sacramental way, the Blessed Eucharist is unquestionably a sacrament of the Church. Indeed, in the Eucharist the definition of a Christian sacrament as “an outward sign of an inward grace instituted by Christ” is verified.

The investigation into the precise nature of the Blessed Sacrament of the Altar, whose existence Protestants do not deny, is beset with a number of difficulties. Its essence certainly does not consist in the Consecration or the Communion, the former being merely the sacrificial action, the latter the reception of the sacrament, and not the sacrament itself. The question may eventually be reduced to this whether or not the sacramentality is to be sought for in the Eucharistic species or in the Body and Blood of Christ hidden beneath them. The majority of theologians rightly respond to the query by saying, that neither the species themselves nor the Body and Blood of Christ by themselves, but the union of both factors constitute the moral whole of the Sacrament of the Altar. The species undoubtedly belong to the essence of the sacrament, since it is by means of them, and not by means of the invisible Body of Christ, that the Eucharist possesses the outward sign of the sacrament. Equally certain is it, that the Body and the Blood of Christ belong to the concept of the essence, because it is not the mere unsubstantial appearances which are given for the food of our souls but Christ concealed beneath the appearances. The twofold number of the Eucharistic elements of bread and wine does not interfere with the unity of the sacrament; for the idea of refection embraces both eating and drinking, nor do our meals in consequence double their number. In the doctrine of the Holy Sacrifice of the Mass, there is a question of even higher relation, in that the separated species of bread and wine also represent the mystical separation of Christ’s Body and Blood or the unbloody Sacrifice of the Eucharistic Lamb. The Sacrament of the Altar may be regarded under the same aspects as the other sacraments, provided only it be ever kept in view that the Eucharist is a permanent sacrament. Every sacrament may be considered either in itself or with reference to the persons whom it concerns.

Passing over the Institution, which is discussed elsewhere in connection with the words of Institution, the only essentially important points remaining are the outward sign (matter and form) and inward grace (effects of Communion), to which may be added the necessity of Communion for salvation. In regard to the persons concerned, we distinguish between the minister of the Eucharist and its recipient or subject.