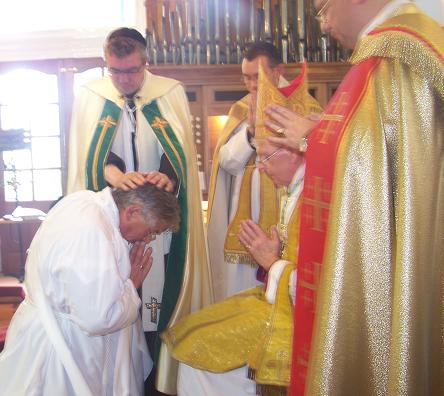 “The priest is not a priest for himself;
he does not give himself absolution;
he does not administer the Sacraments to himself.
He is not for himself, he is for you."
St John Vianney, Curé of Ars

Ordinations have a profound significance for Catholics. Our Faithful know that the priest is not ordained for his family or friends alone. No! The priest “taken from among men, is ordained for men in the things that appertain to God, that he may offer up gifts and sacrifices for sins” (Heb. 5,1). The honor bestowed upon the priest is honor bestowed upon the whole Catholic people out of whose midst he is taken.

The first effect of the sacrament is an increase of sanctifying grace. With this, there is the sacramental grace which makes the recipient a fit and holy minister in the discharge of his office. As the duties of God’s ministers are manifold and onerous, it is in perfect accord with the rulings of God’s Providence to confer a special grace on His ministers. The dispensation of sacraments requires grace, and the rightful discharge of sacred offices presupposes a special degree of spiritual excellence. The external sacramental sign or the power of the order can be received and may exist without this grace. Grace is required for the worthy, not the valid, exercise of the power, which is immediately and inseparably connected with the priestly character. The principal effect of the sacrament is the character, a spiritual and indelible mark impressed upon the soul, by which the recipient is distinguished from others, designated as a minister of Christ, and deputed and empowered to perform certain offices of Divine worship (Summa, III, Q. lxiii, a. 2). The sacramental character of order distinguishes the ordained from the laity. It gives the recipient in the diaconate, e.g., the power to minister officially, in the priesthood, the power to offer the Sacrifice and dispense the sacraments, in the episcopate the power to ordain new priests and to confirm the faithful. The Council of Trent defined the existence of a character (Sess. VII, can. 9). Its existence is shown especially by the fact that ordination like baptism, if ever valid, can never be repeated. Though there have been controversies with regard to the conditions of the validity of ordination, and different views were held at different times in reference to them, “it has always been admitted that a valid ordination cannot be repeated. Reordinations do not suppose the negation of the inamissible character of Order--they presuppose an anterior ordination which was null. There can be no doubt that mistakes were made regarding the nullity of the first ordination, but this error of fact leaves the doctrine of the initerability of ordination untouched” (Saltet, “Les Réordinations”, 392).

In the Latin Church, there are seven clerical orders, all mentioned together 1 in the Historical record by Eusebius (b. A.D. 260) in the 43rd Chapter of the 6th Book of his "Church History." The lowest 5 are ecclesiastical in origin; the higher two are of divine origin. The seven orders are, in descending rank:

A man who is to become a priest first receives the "tonsure" -- i.e., he is received into the clerical state by being given a surplice and having hair shorn away at the crown of the head (over the last 400 years or so, the hair-shearing has passed out of use due to Protestant persecutions). With the tonsure, he becomes a cleric, but still has not received the Sacrament of Orders.

The tonsured cleric is then ordained to each of the Orders above, one at a time, receiving the power of each office, and ascending up through the ranks until he is raised to the dignity of the priesthood, at which time he receives the fullness of the Sacrament of Holy Orders.

Those of the Minor Orders are not obligated to pray the Divine Office or bound to the rule of celibacy (but if they marry they lose their office); however, once the Major Orders are entered into, there is no going back, and from the level of deacon on up, the actual Sacrament of Orders is received. Deacons receive partial fruits of the Sacrament, priests receive the totality of the Sacrament, with only Bishops having more authority.

Holy Orders is the Sacrament by which men become priests and are given a sacred power (sacra potestas) to act in total sacramental identification with Christ (i.e., to act in persona Christi) in order confect Christ's Body and offer it up to the Father at the Mass for the remission of sins; to forgive sins through the Sacrament of Penance; to solemnly baptize; to preside during the Sacrament of Holy Matrimony; to offer Unction to the dying; to preach; and to otherwise teach, guide, and sanctify their sheep. With -- and only with -- the permission of his Bishop, he may be delegated to offer the Sacrament of Confirmation, but to the Bishop alone is reserved the power to ordain other priests (though a priest may be delgated to ordain men to the sub-diaconate and the minor orders).

As in Baptism and Confirmation, the Sacrament of Holy Orders leaves an indelible mark on the soul of the recipient and can never be repeated once validly received; once a priest, always a priest (even if a priest is laicized and removed from his office, this mark remains).

Grant, we beseech Thee, Almighty Father, to these Thy servants, the dignity of the Priesthood; renew the spirit of holiness within them, so that they may hold from Thee, O God, the office of the second rank in Thy service and by the example of their behavior afford a pattern of holy living.

The recipient of the Sacrament must be a baptized, healthy male, at least 25 years of age, who has a vocation from God, a strong Catholic faith, intelligence, a good moral character, and a life marked by sanctity. He must be committed to living a celibate and chaste life, and to prayer (especially the Divine Office, which he is obligated to pray), and must have been properly formed in seminary.

Traditional priestly formation, such as that undertaken by seminarians of the S.S.P.X., lasts for 6 years and includes a thorough study of Latin, liturgy, liturgical chant, philosophy, Theology, Church History, moral Theology, dogmatic Theology, and Canon Law. During the first year, they receive the cassock; during the second, the tonsure; during the third and fourth, they are ascend through the minor orders; in the fifth, they are ordained to the sub-diaconate and then the diaconate; and after the sixth, they are ordained priests. The seminarian's days are heavily scheduled, much like a monk's, with daily Mass, the Divine Office, classes, private study, and community devotions.

Not all priests work in dioceses. Typically, those who do are called "secular priests" or "diocesan priests," and most of these work in parishes and, so, are also called "parish priests." Secular priests make promises of chastity and obedience to the local Ordinary (no promise of poverty is made). Other priests belong to religious orders (e.g., the Carmelites, Dominicans, Franciscans, etc.) and offer Mass for the people of their religious order. These men are called "religious priests" (though sometimes a "religious priest" might work for a parish in some cases). Religious priests make the solemn vows of poverty, chastity, and obedience to the superiors of their religious community that all members of their Order make.

The Rite of Ordination

The Rite of Ordination, is as follows (taken from the Catholic Encyclopdia):

All the candidates...present themselves in the church with tonsure and in clerical dress, carrying the vestments of the order to which they are to be raised, and lighted candles. They are all summoned by name, each candidate answering "Adsum". When a general ordination takes place the tonsure is given after the Introit or Kyrie, the minor orders after the Gloria, subdiaconate after the Collect, the diaconate after the Epistle, priesthood after Alleluia and Tract. After the Tract of the Mass the archdeacon summons all who are to receive the priesthood. The candidates, vested in amice, alb, girdle, stole, and maniple, with folded chasuble on left arm and a candle in their right hand, go forward and kneel around the bishop. The latter inquires of the archdeacon, who is here the representative of the Church as it were, whether the candidates are worthy to be admitted to the priesthood. The archdeacon answers in the affirmative and his testimony represents the testimony of fitness given in ancient times by the clergy and people. The bishop, then charging the congregation and insisting upon the reasons why "the Fathers decreed that the people also should be consulted", asks that, if anyone has anything to say to the prejudice of the candidates, he should come forward and state it.

The bishop then instructs and admonishes the candidates as to the duties of their new office. He kneels down in front of the altar; the ordinandi lay themselves prostrate on the carpet, and the Litany of the Saints is chanted or recited. On the conclusion of the Litany, all arise, the candidates come forward, and kneel in pairs before the bishop while he lays both hands on the head of each candidate in silence. The same is done by all priests who are present. Whilst bishop and priests keep their right hands extended, the former alone recites a prayer, inviting all to pray to God for a blessing on the candidates. After this follows the Collect and then the bishop says the Preface, towards the end of which occurs the prayer, "Grant, we beseech Thee etc." The bishop then with appropriate formulæ crosses the stole over the breast of each one and vests him with the chasuble. This is arranged to hang down in front but is folded behind. Though there is no mention of the stole in many of the most ancient Pontificals, there can be no doubt of its antiquity. The vesting with the chasuble is also very ancient and found already in Mabillon "Ord. VIII and IX." Afterwards the bishop recites a prayer calling down God's blessing on the newly-ordained. He then intones the "Veni Creator", and whilst it is being sung by the choir he anoints the hands of each with the oil of catechumens...

...The bishop then hands to each the chalice, containing wine and water, with a paten and a host upon it. This rite, with its corresponding formula,.. [signifying] the power which has already been received, is not found in the oldest rituals and probably dates back not earlier than the ninth or tenth century. When the bishop has finished the Offertory of the Mass, he seats himself before the middle of the altar and each of those ordained make an offering to him of a lighted candle. The newly-ordained priests then repeat the Mass with him, all saying the words of consecration simultaneously. Before the Communion the bishop gives the kiss of peace to one of the newly-ordained. After the Communion the priests again approach the bishop and say the Apostle's Creed. The bishop laying his hands upon each says: "Receive ye the Holy Ghost, whose sins you shall forgive they are forgiven them; and whose sins you shall retain, they are retained." ...The chasuble is then folded, the newly-ordained make a promise of obedience and having received the kiss of peace, return to their place.

It is customary for those who attend the priest's Ordination and/or first Mass to kiss the palms of his hands which have been consecrated by holy oils.  To do so, kneel on the left knee (or bow profoundly if kneeling is not an option) and kiss the palm of each hand.